Max Headroom arrived a couple of weeks ago. He's an historical scow conforming to International Moth class rules. He probably should be in a museum, but our maritime museums are not much interested in boats like Max that have had such significant impact on Australia's sailing history because of funding limitations. Therefore I feel a bit of a responsibility as his custodian to ensure that he is not only preserved, but also sailed regularly so that people can appreciate him that way. He needs some work to bring him back to his old self. Some people say I have plenty of time. Ha ha, do I?!

Max, an International scow Moth, was designed in 1972 and is the only one ever built of this design by Greg Marshall, a one time Australian National Moth Champion. The International Moths are a development class that have to be 11' long and carry 8sqm of sail (about 85sq ft), and must be a mono-hull design. That is basically the designer's brief, so all sorts of weird designs evolved from this amazing class of sailboat which have now evolved into carbon fibre foiling flying machines that you may have seen on waters around the world.

They are built super light to be fast. Max weighs less than 20kg and is built in the same fashion as an aircraft wing, and from plywood that is mostly 1mm thick! True Aussie ingenuity went into these little wooden boats to make them strong and light. Because designs evolved so quickly and they were fragile, the lifespan of a Moth class boat was often just a couple of years. As a result, not many old scow Moths have survived, so Max is indeed a rare breed.

The last time a scow type Moth won a World Championship was in 1982. This was the end of the scow's dominance and the skiff designs became more successful. The skiffs were initially quite wide (called fat skiffs), but designs became increasingly narrow until hulls were no wider than 12". Inevitably, foils were tried and they soon began to fly. 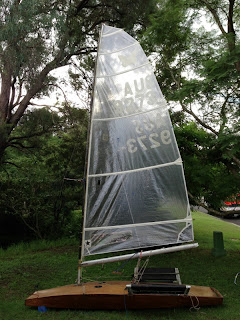 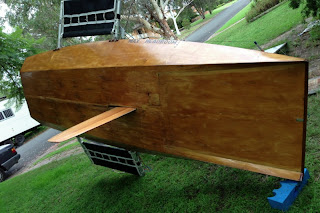 This pic clearly shows the "bow foils". The idea was to improve upwind performance by maximising waterline length.

However, as designer Michael Storer points out, this idea was dubious at best. This is what he said: "I really dig the hull shape. I am not really convinced by the argument about windward performance. I don't buy any of the arguments about waterline length. It's not waterline length that is important, it is waterline volume.  As an example of silliness in the late '60s the FDs sailed with their rudders up downwind to "increase waterline length". The thing that does work is having enough length spread out (multi hull) or enough volume in the ends (dinghy) to not squat down in the trough of the wave train. But all that aside I really dig the bottom shape." 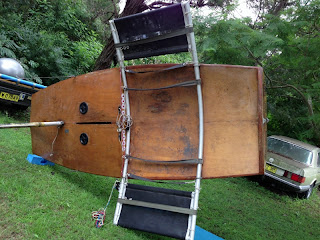 I run a website called The International Moth Archive @ http://international-moth-archive.org and I'm wondering if I can link to your blog and if you'd be willing to contribute to the website. Your restoration project is a great story and I'd love to pass it on.