A common method used for spreaders in the 60’s and through to the 90’s was to make up the spreaders by riveting together some 1” x 1/8” aluminium bar and have them articulate at a fitting on the mast. In this way the spreader remained fixed relative to the stays while the mast was free to rotate.

This is what mine looked like. Likely it had been trodden on a few times to many in the boat park as they were pretty buckled and some cracks were also appearing under the tape. Time to replace them I think. 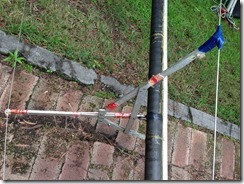 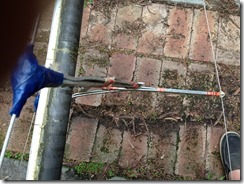 My original thoughts were make up a three pronged spreader from 6mm 5-ply that I have lying around from the remnants of the Goat Island Skiff project. Then glass these to stiffen them. Another way would be to laminate the ply and then shape them like foils. They would be light and strong. But I also had lying around some fibreglass sail battens and so I started to think about a use for these. Singly they flexed quite a bit, but once glued together with some spacers laid at 90 degrees to the battens they became very stiff, so this is the way I went. The joints were epoxied and reinforced with Kevlar strands. Here is the completed spreader which is lighter and somewhat stiffer than than the old one. It may prove to be a disaster, but then again, it may not! 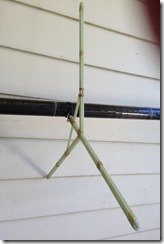